Face to Face the movie 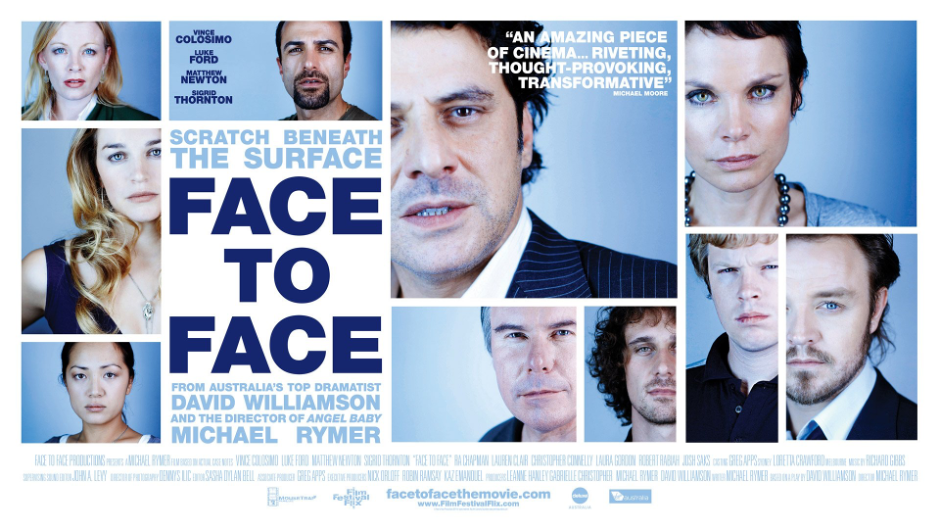 Grab some popcorn and watch a movie on us!

ProActive ReSolutions invites you to watch the internationally award-winning Australian production about a group co-workers impacted by workplace conflict, sexual harassment and physical violence who courageously step forward into dialogue at the very moment their instincts are to recoil and separate.

Face to Face is a film adaption of the play by the same name, based on the character of our CEO, John McDonald and the pioneering work he’s done in using restorative justice processes to help groups of people in conflict transform their relationships.

Please note access to the film is password enabled (facetwofacetwo). Viewing of film is strictly for personal use or educational purposes.

“Face to Face is that rare film which grabs a hold of you at the beginning and doesn’t let go till the end. It is an amazing piece of cinema – riveting, thought-provoking, transformative. Only once or twice a year do I see such a film – and this year that film is Face to Face.” Michael Moore

“Everyone’s dirty laundry gets raised up the flagpole in Face to Face, a bristling little Australian indie that lands its many punches with pungent power. Within the format of a community conference – an Australian technique of airing differences with the hope that reconciliation can avoid official legal proceedings – what seems like a simple case of a wild youth’s violence fans out to expose a far deeper and comprehensive set of ills. Winner of the Santa Barbara Film Festival’s independent feature award, this smartly enacted issues drama snaps the audience to attention from the outset and never lets up…” Todd McCarthy, Hollywood Reporter

“One of the most powerful movie of the 21st Century. Movie making at its best” Georges Chamchoum, Artistic & Program Director Monaco Charity Film Festival

“My problem with Face to Face is that, hard as I try, I can’t find any flaws. The film opens with a shock, a scene that looks like road rage, but isn’t. From then on, nothing is what it seems, as a cast of variegated characters decides the offender’s fate. I found myself stuck to my armchair waiting for the next Pirandello-like unravelling of character. Audience assumptions are built and peeled away, one surprise follows another to reveal identities and relationships. It isn’t easy to maintain pace when the focus is on a small set of men and women sitting in a single room, but Australian Director Michael Rymer has a deft hand. The casting is superb, the attention to detail stunning. Face to Face lived up to its promise – a film as powerful and riveting as 12 Angry Men. Can Rymer’s next effort maintain the momentum?” Lois Bolton, Monaco Diary & BAM News, Monaco